Objective
The Veterans History Project (VHP) is an oral history program that collects and preserves the firsthand interviews of America’s wartime veterans. Keshav led a project that involved interviewing 9 veterans based on guidelines set by the beneficiary, the Library of Congress. Each interview was about 30 min long. Keshav submitted to the beneficiary audio/video recordings of these interviews, which are now part of the permanent collections of the Library of Congress. The beneficiary considered this an ideal opportunity for a Boy Scouts of America Eagle Project.

Beneficiary
The Veterans History Project of the American Folklife Center collects, preserves, and makes accessible the personal accounts of American war veterans so that future generations may hear directly from veterans and better understand the realities of war. Researchers and the general public use VHP collections for a wide variety of projects and purposes, including academic papers and scholarship, documentaries, genealogy research and personal interest. Some collections are also used by the Library of Congress in presentations, exhibitions, publications and events to promote the Veterans History Project. Veterans’ family members also treasure the memories that are permanently preserved at the Library of Congress for future generations. 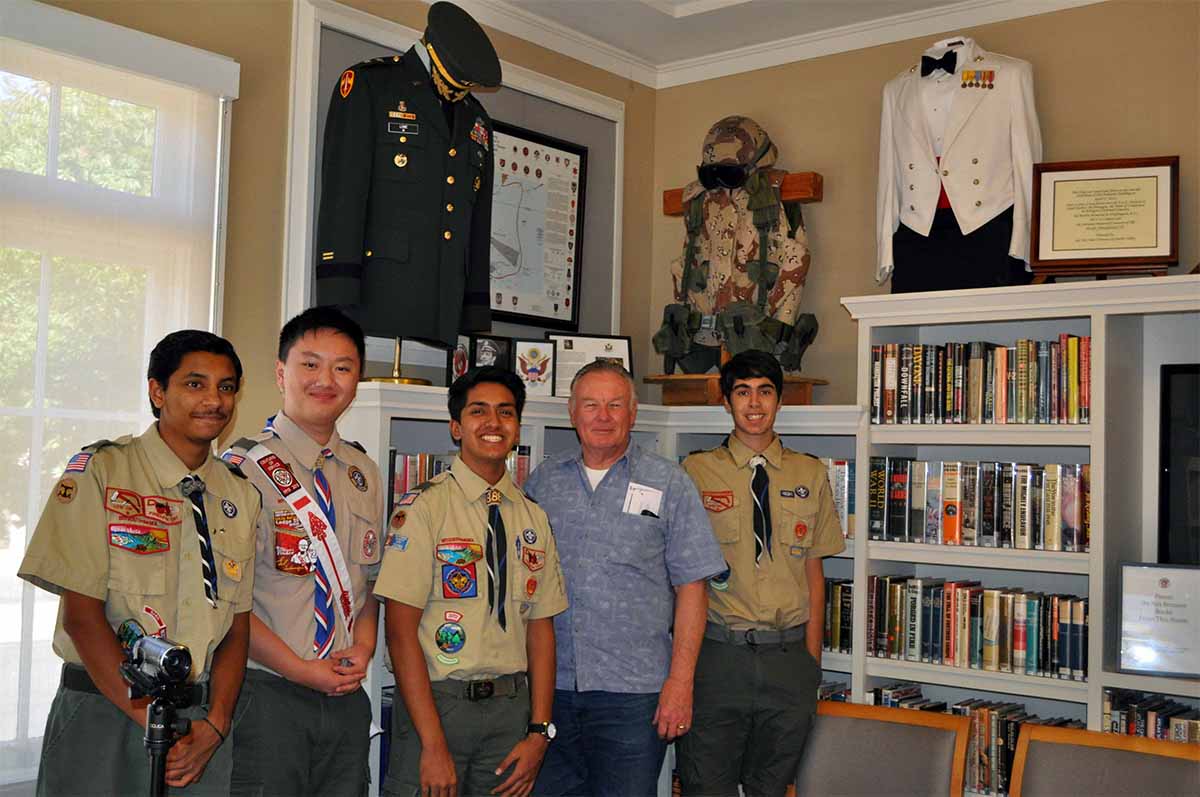 Highlight of the Project
Keshav has a passion for history and he took the opportunity to further his learning of this subject when he started working on his Eagle Project. He wanted to do something that he genuinely cared about, so he selected the “Veterans’ History Project”, a program run through the Library of Congress that collects and preserves the firsthand accounts of those who served in that nation’s military. He interviewed nine veterans from conflicts ranging from Vietnam to Afghanistan and sent those interviews back to the Library of Congress, thus helping to permanently preserve the memories of their service to the nation. 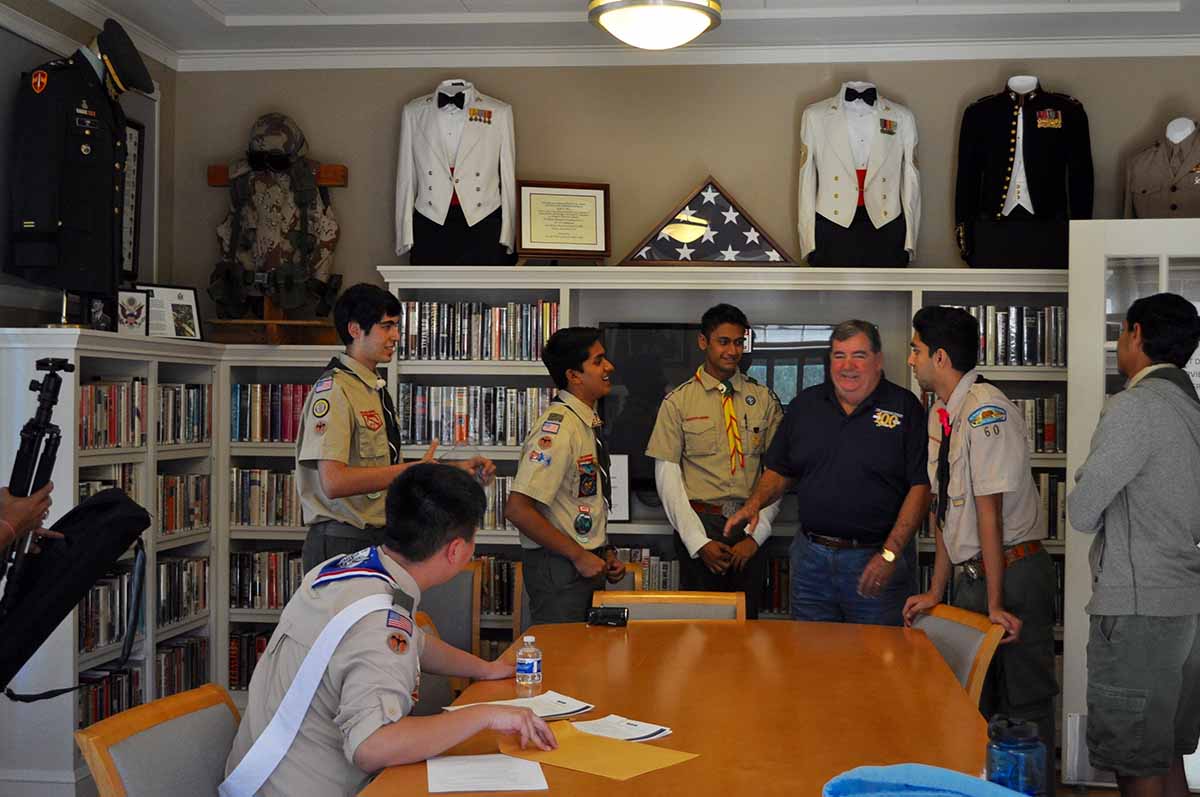 Speaking to these men and women was a truly eye opening experience for Keshav. Growing up in a place as liberal as the Bay Area, it was sometimes easy to make assumptions about military action in controversial conflicts. The Veterans’ stories showed him that service was distinct from political intent. These were normal people who were following orders. One interviewee had even taken part in anti-Vietnam protests before he was drafted, but served admirably. This project was a powerful reminder for Keshav that there were multiple sides to every story. After his interactions with the men and women veterans from World War II onwards, he learnt a great deal about courage, leadership and honorable service This opportunity to interact with people whom he could look up to as role models, who were outside of his regular community, has been a great gift to him. 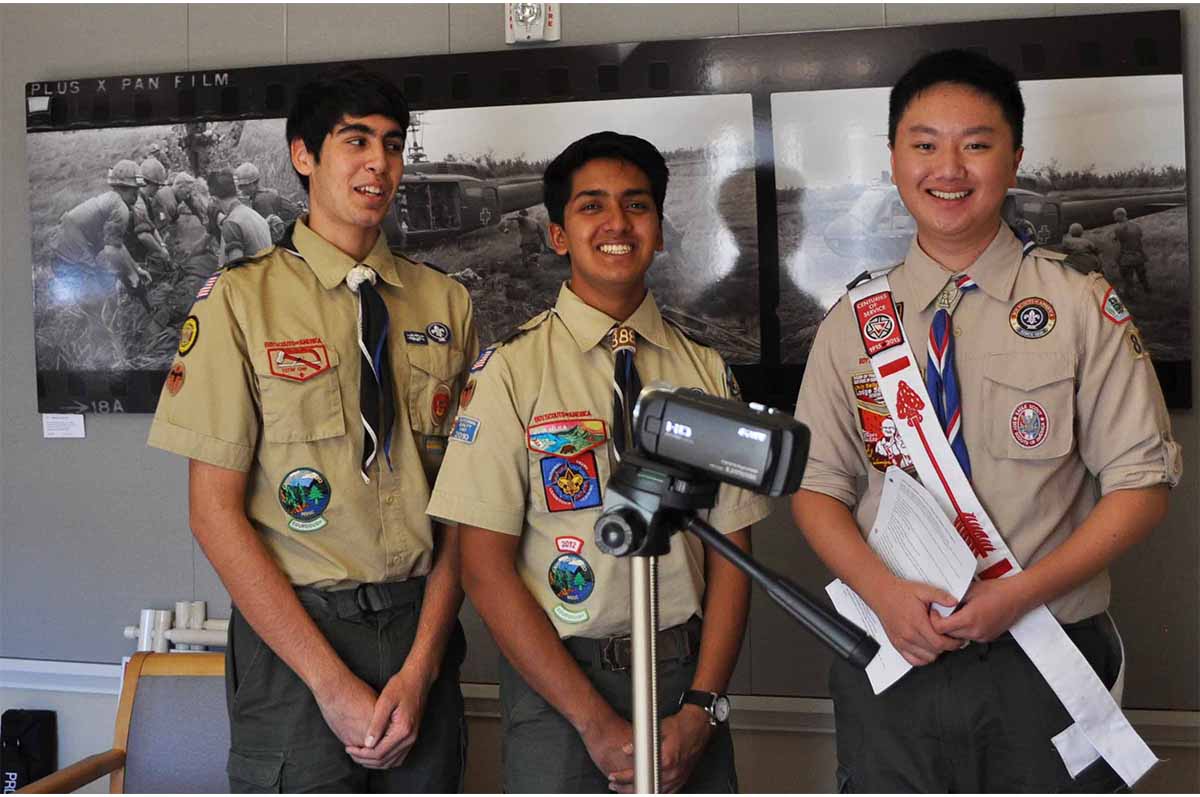 Jan
15
Fri
5:30 pm NASA Presentation with Mrs. Anim... @ Online (Google Meet)
NASA Presentation with Mrs. Anim... @ Online (Google Meet)
Jan 15 @ 5:30 pm – 6:30 pm
Remarks: Description: On January 15th from 5:30 – 6:30 pm (about 1 hour, maybe a little longer), Mrs. Anima Patil-Sabale (Orion Spacecraft Simulations Lab Manager at NASA and a NASA Astronaut Aspirant) will be giving a presentation on “Deep Space Dreams: Making the Impossible Possible”. This is a presentation where she talks about her journey intertwined with the challenges of deep space travel. This will be a virtual outing hosted through google meet. You will receive the link via email 1 hour before the event (only if you register). This outing is open to the troop (scouts, adults, and siblings)! If your sibling(s) will be attending, please add that in the registration comments while submitting your RSVP. Update: your sibling or other family members joining this outing can join on separate computers. For more information (such as the agenda, preparation, expectations, etc.), please visit this document: https://tinyurl.com/y2p6pj65. Please keep in mind that I sent out an email to all attendees (on January 2nd) with more information, so if you registered but didn’t receive it, be sure to let me know. If you have any questions, feel free to email me at aadisheth2000@gmail.com. SPL: Adarsh Sheth ASM: Mrs. Lax Second Adult Leader: Mrs. Sheth
Jan
17
Sun
8:30 am Mask Making Service Project
Mask Making Service Project
Jan 17 @ 8:30 am – Jan 24 @ 8:00 pm
Remarks: Help make masks for the needy! Description: Help the needy by making 40 simple but high quality face masks. Come to my house (2016 Tarragon Rose Court) on the 17th (Sunday) to get the materials. At 10:00 on the 18th, a Zoom meeting will be held for the instructions of how to make the masks (I will send the link through email after you register). Remember to sanitize the work area as well as yourself, and wear a mask yourself. Please finish by the 24th. Once finished, come to my house to return the completed masks. We will give the masks to a organization named the Common Humanity Collective. You will receive 3 service hours. Please sign up! SPL: Pranav Nimmagadda ASM: ASM if needed: Mr. Aravind Krishnasamy. We will probably not need a lot of help from him since this is an asynchronous project. The scout’s parents will be supervising the scouts. Secondary Adult Leader: Mrs. Srujana Nimmagadda
Jan
22
Fri
all-day Rainwater Collection Project
Rainwater Collection Project
Jan 22 all-day
Remarks: Time: 3:00-6:00 P.M. Description: In this outing, we will be placing rainwater collection pipes on a greenhouse in the Fertile Groundworks land. The rainwater will then flow into a large water basin to be used for the crops in the area. It will require advanced construction work, good patience, and careful attention to detail, so this will be a fun and unique outing for those who are looking to get some service hours. This outing will be only for those 14+. Please come with your activites A and B forms. You can come in any clothing, but just make sure you can dirty it a little. MASKS WILL BE REQUIRED TO MAKE SURE WE DON’T CONTINUE THE COVID-19 SPREAD. Please bring work gloves if you have them. I would strongly recommend bringing a water bottle and jacket. NO carpool due to Covid restrictions- please be on time Totally only 5 SCOUTS SPL: Vikram Ravi ASM: Mrs. Raja Other Adult leader: TBD
Jan
23
Sat
11:00 am Virtual Cooking Outing @ Virtual
Virtual Cooking Outing @ Virtual
Jan 23 @ 11:00 am – 12:00 pm
Remarks: Description: I am planning to host a virtual outing where I will be explaining cooking for the younger scouts who want to work toward their second class or tenderfoot cooking requirements. I am planning to demonstrate the following things below: 1. Importance of good nutrition. 2. How to create a meal plan using MyPlate. 3. Proper food handling (how to transport, store, and prepare the foods you selected). 4. How to pack a patrol box for the campout. Second class cooking requirement – 2d 5. How to set up a lightweight stove and propane stove. Describe the safety procedures for using these types of stoves. Date: January 23rd 11:00 am ASM: Praveen Subramanian Adult Leader: Mrs.Rajaram SPL: Anerudh Praveen
Jan
30
Sat
11:00 am Virtual Cooking Outing @ Virtual (Google Meet)
Virtual Cooking Outing @ Virtual (Google Meet)
Jan 30 @ 11:00 am – 12:00 pm
Remarks: Description: I am planning on holding a virtual cooking outing for scouts who are interested in working towards getting their tenderfoot and second class cooking requirements. We will be covering very useful and important requirements during the outing: 1. Importance of sharing work between patrol members in meal preparation and cleanup. 2. How to safely clean items/utensils that are used to prepare, serve, and eat a meal. 3. How to select foods from MyPlate(creating a meal plan), importance of good nutrition, and how to transport the food that you’ve selected. 4. Necessary items to have in a patrol box 5. Live demonstration of how to set up a propane stove along with the safety precautions to keep in mind when using this stove. For the scouts who register, please make sure to read over the tenderfoot and second class reqs they need. Date: January 30th 11:00 am ASM: Mr. Dipinder Khurana Secondary Adult Leader: Mrs. Avanthi Gunturu SPL: Pranav Gunturu
View Calendar
Add