Patrol Leader Shiven Aggarwal led the Hydra Patrol on a conservation outing at Fertile Groundworks, a non-profit organization focused on sustainable and organic methods of gardening and food production. Ms. Brenda Kusler, the Executive Director there, had planned their conservation project, which involved putting Alyssum seeds, mixed with soil, onto a dirt bed. These seeds were selected as they attract beneficial insects, such as syrphid flies, which kill a pest called aphids. The seeds were laid out in the middle column with a one foot distance on both sides, as they needed space to germinate and grow. Next, the mulch (an assortment of decaying leaves and bark) was laid as a thick layer on these seeds to keep the moisture in for them to germinate and also to keep any birds away from the seeds because they could eat them. Overall, the outing went great and, according to Shiven, the Hydra scouts participated with lots of energy!

Sarim Mundres wanted to give back to Ilm Tree, a non-profit charter school that his family was associated with for years. He reached out to them and realized that there was a need for an outdoor library where children can read books during recess. The library would also enable teachers to have outdoor reading time with their students. The first day (2/8/20) of the project was focused on the construction of the library itself. Scouts built the library from plywood, and then painted the exterior of it. The following day was dedicated to installing the library at the school itself. Sarim consulted multiple individuals about possible modifications to the design to ensure the library was sturdy – because a poor foundation could risk the structure falling when children were nearby. He and his team of Scouts rested the library on top of two posts, and then cemented the library posts 18 inches into the ground. In addition, to protect the books inside from bad weather, waterproof weather stripping was added to the interior of the library. Overall, there weren’t any major issues, and the project was a success!

Aniket Sheth’s Eagle Project required him to construct a 65″ x 30″ x 12″ cabinet set for the Jain Center of Northern California Temple in Milpitas, CA. Its main purpose was to increase the storage space in the Puja room, while also reducing foot traffic in and out of the small room. His project was executed in three parts: the first day was dedicated to painting the cabinets, the second day was dedicated to constructing the cabinets, and the third day was dedicated to installing the cabinets at the JCNC temple. Battling the challenges of COVID-19 regulations, beneficiary changes, and construction errors during the project, Aniket was able to overcome these challenges with effective planning and preparation. Overall, the scouts worked efficiently, and the project was well executed despite these challenges. 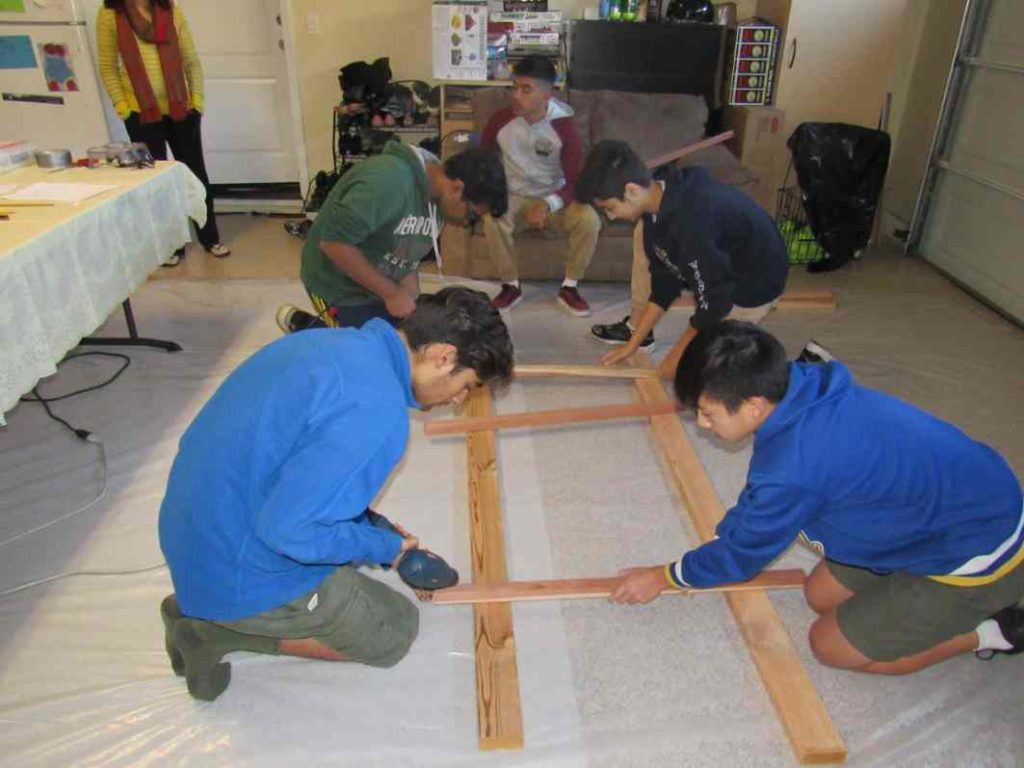 Archit Gupta wanted to improve the conditions of his Hindu temple, as it represents important religious and cultural values to his family and the local Indian community. Since the temple is rather small and underfunded, Archit decided to build a storage shelf in order to organize materials in a presentable manner and make the work of the temple’s priests easier to carry out. The name of the temple is Sri Sai Datta Temple and Cultural Center.   Overall, the project went smoothly, and despite running into some issues with assembly instructions, the scouts and Archit were able to improvise and complete the project successfully.

Keeping with the communications received from the School District, Scouts BSA, the County health department and our Troop’s health and safety in mind, all Troop events and activities are canceled till end of Spring break – Apr 10th. We will be assessing the situation at the end of March and keep you informed of when we will resume as a Troop to have meetings and events.   Does this mean that the New Scout Campout is canceled? Yes, we will postpone this event until it is safe to have the campout and send out a communication accordingly.   What about Patrol meetings, Merit Badge sessions and Patrol Campouts? Keeping your safety in mind, it is recommended that you postpone your events/meetings until advised.   What about SM conferences, and BORs? These are postponed as of now to April 2020; please stay tuned for further communication on this.   What about the Mar 30th COH? This event is also canceled; the new date for the next COH will be announced.   The current leadership term is ending in April. Will this jeopardize my leadership term? No, your record is being kept track of on the website. Please track your activities on the leadership form and meet with your mentors for any questions.   What about Eagle projects that have been scheduled? Scouts who are working on their Eagle projects will be advised by their Eagle advisors on next steps and will continue to work under their guidance.   Can you please remind me of how to stay healthy and safe in this situation? The best ways for all Contra Costa residents to reduce their risk of becoming infected with COVID-19 are: Wash hands with soap and water for at least 20 seconds Cover coughs or sneezes with disposable tissue or the crook of an elbow Stay home from school or work when you are sick Avoid touching your face, eyes, nose or mouth with unwashed hands If you have any questions or concerns, please reach out to us. Thank you for listening, Yours in Scouting, Smitha Panchumarthy Daman Singh Ronnie Payne Shanthi Subramanian. 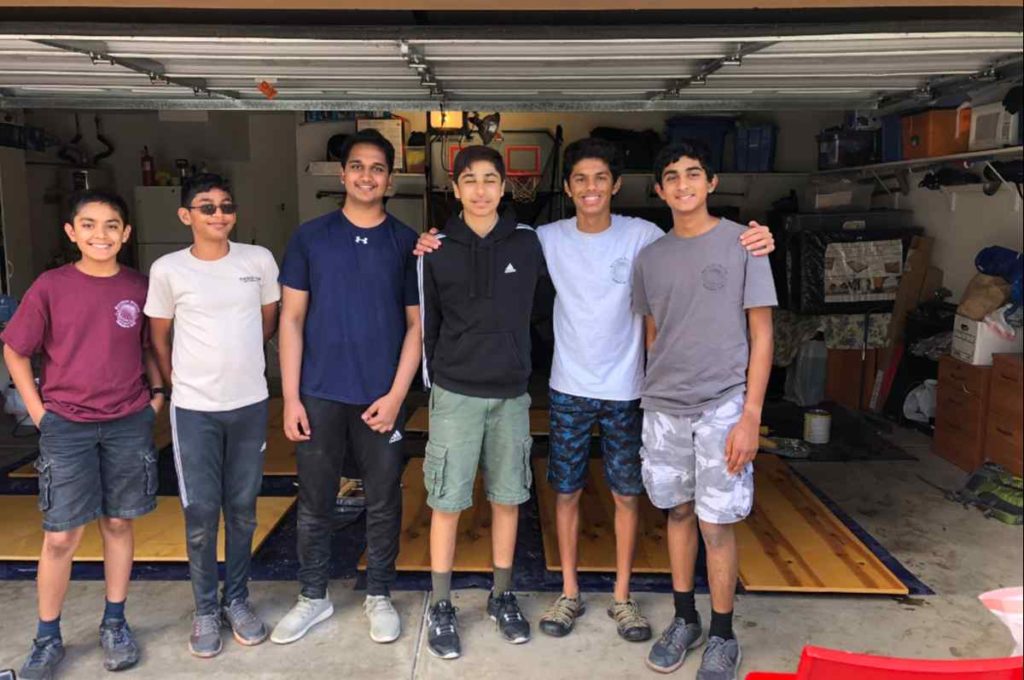 Manyu Kamran was inspired to make a shelf and help organize the Hayward Animal Shelter by his passion for animals. He has always loved animals and wanted to help those in need. The shelf Manyu was planning to make would be 5 feet tall, 6 feet wide, and 2 feet in depth. The project was split into two days, one for painting and sanding the shelf, and the other for construction.   Everything went well and the scouts worked efficiently. Manyu faced some challenges and he learned to be more prepared for any situation that may arise. There was also a third day where Manyu and a few other scouts from a different troop transported the shelf and helped organize their dog play area entirely. This shelter is underfunded and understaffed, and this project helped them stay organized. Overall, the project was a great success. 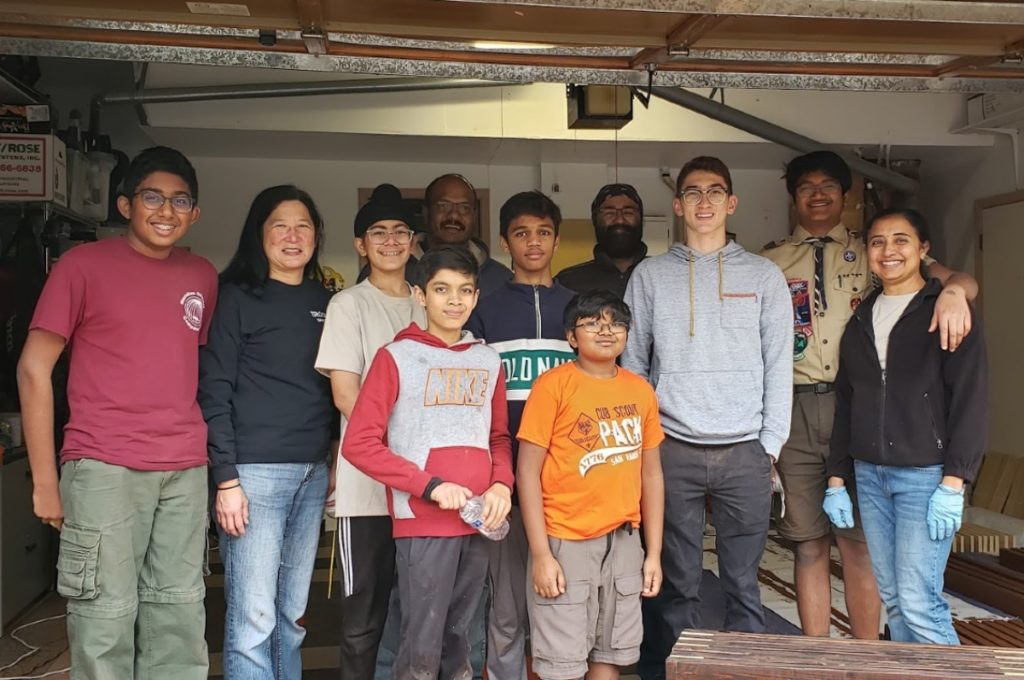 Rohan’s Eagle Project was to build 4 slatted wooden benches that were going to be given to Meadow Homes Elementary School in Concord. He found out about the school since it was Coyote Creek’s sister school. The problem that they had was that they didn’t have benches for the students to sit on during lunch. He worked with the principal of the school to make sure his project went successfully. The only issue that Rohan had run into was a lack of older scouts to help him as he had numerous power tools that could only be operated by scouts who are 14 years of age or older. Overall the project went very smoothly. The instructions were clear, the work was done on time, and the benches turned out well. They were also later installed at the school by screwing them into the blacktop. 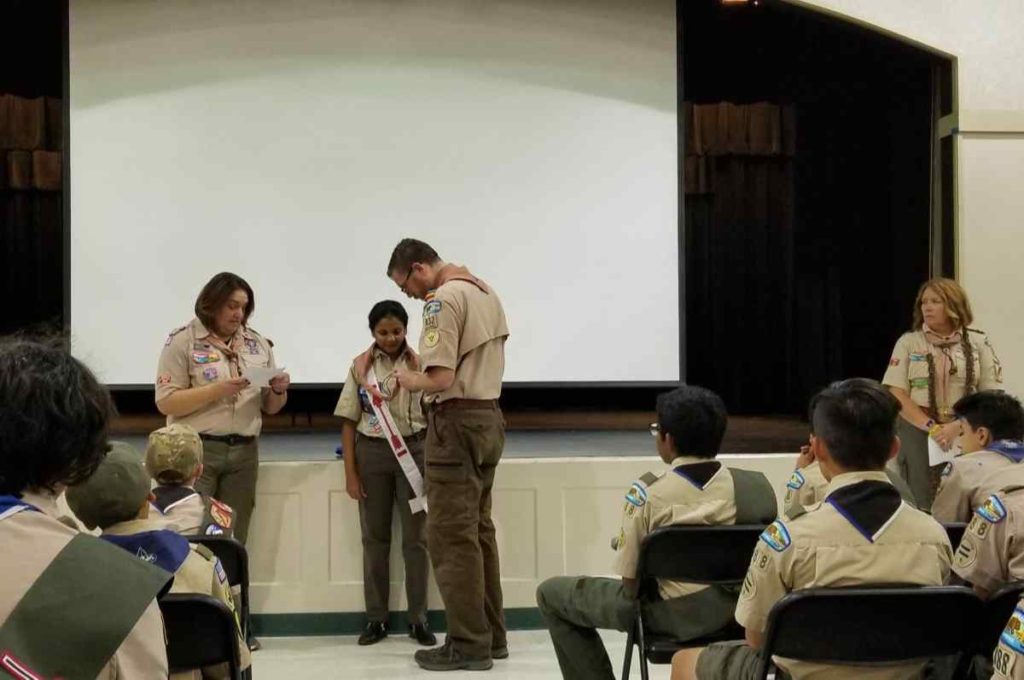 The wood badge program is a leadership program for adult leaders around the world. It was founded by Robert Baden-Powell himself back in 1919. The course itself attempts to make Scouters better leaders through different activities, such as listening and managing conflict. It is important for adult leaders to complete this training because it teaches advanced leadership skills while creating a commitment to the Scout movement. The wood badge also helps leaders learn how to do certain things, such as managing conflict, leading change, coaching & mentoring, leadership for different stages, project planning, and more. The benefits of completing the Wood Badge include a stronger troop, a fun experience, and a deeper understanding of Scouting. Adults in Troop 888 can now click here to register for Woodbadge. Weekend 1 Camp Herms Friday 09-18-2020 7:00 AM PT to Sunday 09-20-2020 5:00 PM PT Weekend 2 Camp Herms Saturday 10-10-2020 7:00 AM PT to Sunday 10-11-2020 5:00 PM PT Click here for more information about Woodbadge in our district.

Focusing on service to veterans, servicemembers and communities, the Legion evolved from a group of war-weary veterans of World War I into one of the most influential nonprofit groups in the United States.

Over the years, the Legion has influenced considerable social change in America, won hundreds of benefits for veterans and produced many important programs for children and youth.

Troop 888 meets every Monday 7:00PM at Gale Ranch Middle School 6400 Main Branch Road San Ramon, Ca. 94582 in the Multi-Purpose Room where we plan outings, work on merit badges and work together toward the advancement of the young men in our troop.